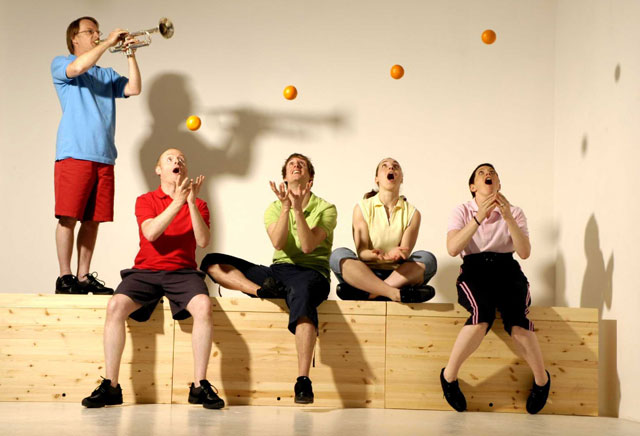 Hari is 6 and deaf, an ordinary boy living an ordinary life: he gets up, goes to school, plays with his deaf and hearing friends. BUT Hari has an EXTRA ordinary imagination, which turns the world as he experiences it through his listening eyes into a place of surprising and magical happenings!

Listening Eyes is a bright, colourful and entertaining work by four performers and two musicians from Green Candle Dance Company. This is a show designed for children aged four plus and the performers clearly bear this in mind as they sing, dance, act, sign and interact with the audience of young children and their parents.

The vibrant performers wear primary coloured t-shirts. The use of sign language, gesture and animated dance steps wonderfully tell the story of Hari, a six year old boy who is deaf.

The performance begins with a clear introduction from the performers, which is also signed. The lights then go down and we get an insight into the life of a typical school boy and some of the difficulties he encounters. We are introduced to Hari as he wakes up in the morning and gets ready for the day ahead. We then follow him to school where he meets all his friends, to football practice and then home and back to bed again.

Interspersed with his day-to-day activities we are given an insight into Hari’s amazing imagination. One of Hari’s imaginative interludes is sparked by his seeing a burning house on the way to school. Hari imagines that the blaze is a battle between a fire-breathing dragon and an elephant.

Scenes from Hari’s imagination are brilliantly depicted by the performers and are enhanced by clever but simple props. Four oblong boxes on wheels, each painted in a bright primary colour are wheeled around the stage to variously form a bed, a football pitch, a wall, a sales point and many other objects that enhance the story. The boxes also contain the majority of the props that are used in the work, which help the performers to seamlessly move from one scene to the next.

Although there were only four performers and two musicians, a far greater number of characters appear in Listening Eyes. This is achieved through the effective utilisation of props. By putting on a bright yellow headband Hari’s school friend becomes his sister. Another of Hari’s friends becomes his mother simply by donning a beret and a jacket.

Listening Eyes is accompanied by two musicians who play a smorgasbord of instruments including the trumpet, glockenspiel, bongo drums, maracas and the guitar.

One of the highlights of the performance is the ABC Signing Song. This involves the performers reciting and signing the letters of the alphabet within a rhyming song. “A, B, C, D, I’m so happy to be me”. This song is repeated a few times during the performance to the delight of the children in the audience.

To sum up, Listening Eyes is both an entertaining and informative production that both deaf and hearing children and their families will enjoy.